Everything You Need to Know About EBOO
|Dr. Yoshi Rahm with Dr. Christine Schaffner| 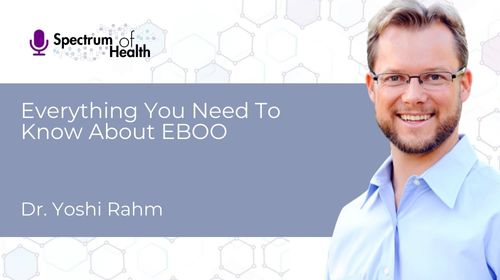 In this episode of the Spectrum of Health podcast, Dr. Christine sits down with Dr. Yoshi Rahm to discuss Extracorporeal blood oxygenation and ozonation (EBOO) treatment. Dr. Yoshi explains the treatment of EBOO, what ailments can be healed by this treatment,  and how it can be used to boost the immune system.

Dr. Yoshi Rahm is a board-certified osteopathic family physician with separate board certifications in Integrative and Holistic Medicine. Much of his life’s pursuits stem from growing up far outside a small Northern California town.  His simple upbringing, which included living without electricity, TV, or phone, gave him an early appreciation for healthy living.  The suffering of unwell family members was a big driver for Dr. Yoshi to pursue healing by becoming a family physician.  After residency at Glendale Adventist Medical, Dr. Rahm became an Attending Physician teaching at the same residency program and founded Oasis Family Medicine.

Listen in to learn more about:

Visit his website: https://www.oasisfamilymedicine.com/video-resources  for free “12 steps for Anti-Aging Your Brain” or a free guide “Transform Your Health in 21 Days”

LISTEN OR SUBSCRIBE FOR FREE IN YOUR FAVORITE PODCAST APP:

Have you shared a review for the Spectrum of Health Podcast?

Podcast reviews are essential for all podcasters. They show that others enjoy your show and help people discover it. We would love for you to leave a review for the podcast.

Dr. Yoshi Rahm is a Board-Certified Osteopathic Family Physician with separate board certification in Integrative and Holistic Medicine. Dr. Rahm grew up in a small town in Northern California. His simple upbringing, which included living without electricity, TV, or phone, gave him an early appreciation for healthy living.

He attended U.C. San Diego, where he majored in Animal Physiology and Neuroscience and minored in Human Development. After graduating, Dr. Rahm interned at a neuroscience laboratory in Germany and traveled throughout Europe before working at a nonprofit Biotech laboratory in San Diego.

Dr. Rahm attended Western University of Health Sciences, College of Osteopathic Medicine. As a medical student, he participated in many volunteer activities, including medical missions to Mexico and Ecuador. After medical school, he completed his Internship and Residency in Family Medicine at Glendale Adventist Medical Center. During his time there, he was elected Chief Resident. Upon graduation, he received the two highest distinctions: the “Resident Teacher Award” presented by the faculty and the “Resident of the Year Award” recognized by the staff. Dr. Rahm then became an Attending Physician teaching at the same residency program.

Dr. Rahm feels blessed to be a Family Medicine physician. His Montrose-based practice merges a highly accessible and compassionate practice with technologically driven tools and an evidence-based approach to healing. He is honored to care for everyone in the community, from newborns to geriatrics, with new or chronic conditions. His primary goal is to help patients achieve optimum health.

In his spare time, Dr. Rahm enjoys spending time with his friends and family, especially his wife, three children, Kalaya, Zoey, and Kamal… and their amazing dog, Olive. His other hobbies include running, swimming, movies, practicing yoga & Qi Gong, reading fiction books, playing any and all sports, and trying new foods – the spicier, the better!